Education as the Silver Bullet

Embarrassed but managed to get a plate
We was kids hungry
Mom's working, I was famished
She getting home late
So I decided now I'm in charge
Either stay full or starve…”
-NAS

I often start presentations with the idea that education is a silver bullet.  I believe the reason we all care about, and are passionate about education, is because we all understand the importance of being educated and what it can do for us.  The idea that “you need an education” applies to all classes and across all the ages.  This is especially true if you are born into a cycle of poverty.

From my own experience, I know an education can literally change a family’s destiny in just one generation.  In addition to the impact education has to a immediate family, there is a domino effect that cascades across the community.

I am a first generation American, born in Hell’s Kitchen, NY and raised by a single mother who illegally emigrated from Argentina.  My mother spoke only Spanish so I showed up at PS 111 for kindergarten and had no idea what anyone was saying.  English is technically my second language.  I grew up on welfare in a nasty environment where I saw my first murder at 10 years old.  My friend’s mother killed her boyfriend with a kitchen knife in their apartment two buildings over.  We were having a sleep over at my place that night but we were supposed to stay at his place.  I was shot at when I was 15, had a loaded gun shoved into my mouth when I was 16,  and went to more funerals in high school than most people go in two life times.  Crime and drugs were just part of my every day experience and Hell’s Kitchen was the proud birthplace of crack.  I saw my first vial three years before it showed up on the cover of Time as a “ghetto epidemic.” I didn’t need Nancy Regan to encourage me to “just say no,” I figured out all on my own that I didn’t want to spend my evenings at Grand Central Station “taking care” of commuters in the men’s room for a few dollars to buy my next hit.  Many people I grew up with hopelessly tried to support their new habit.

I think one of the reasons it’s so hard to break the cycle of poverty is human nature.  You just don’t know how terrible everything is.  You just think everyone lives like that.  If you take someone from a “normal” situation and put them in that environment, I believe they would do whatever they could to get out!  When all you know is poverty, drugs, death, and violence, you just live in it.

My mother did work out on Long Island and in the summers, I would go spend weekends there while she worked.  I got to see what was actually normal and I wanted in.  I wanted to get out of Hell’s Kitchen.  I recognized education was my silver bullet and because of it, my two kids do not need to experience life the way I did.  The cycle is broken.

When I was a kid, I used to wake up without electricity.  My mother couldn’t or sometimes wouldn’t pay the bill and I would go days without having electricity.  My 11 year old wakes up and complains that he has to suffer through a system update on his PlayStation 3, before he can play Call of Duty online with his friends on his 55 inch 3D TV.  He is already asking if we can start visiting the colleges he is interested in.  The cycle is broken.

My daughter, a second year student, never asked if she had to go to college.  She just always assumed she would and even before she picked her college, she was strategizing where she was going to go to graduate school.  The cycle is broken.

The impact isn’t only felt by my family.  It is felt by my community.  Education is what makes us better and it is supposed to be the equalizer in the American dream.  Get educated, work hard, and you control your family’s destiny.  That’s what I bought into and it worked for me and countless others who grew up just like I did. 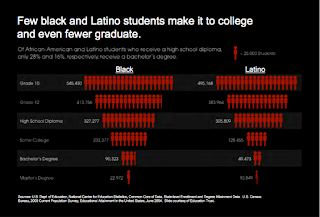 Today, this idea is in serious trouble.  Lots of recent data suggests that the achievement gap between rich and poor children is getting wider, which of course threatens the idea of education as a silver bullet.  I’m afraid this could just become the norm, accepted culturally as just the way things are.  If this happens, we’ll never be able to capitalize on the amazing potential education has to change families.

A NYTs article by SabrinaTavernise, “Education Gap Grows Between Rich and Poor Studies Say,” points out that in long term data, researchers are finding, “while the achievement gap between white and black students has narrowed significantly over the past few decades, the gap between rich and poor students has grown substantially during the same period.”  They point to a study that shows the gap in standardized test scores between affluent and low-income students has “grown by 40% since the 1960s.”  The gap is also getting dangerous in college.  Researchers looked at two generation of students from both high and low income families.  One generation from the early sixties and the other form the late seventies.  For high income students, the number of college graduates went from one-third in the first generation to more than half in the second one.  For low income students, the college graduation rate went from five percent to nine percent.  The gap got wider.

Clearly, parental influence goes a long way.  My children have had education and learning hammered into their heads.  They are in my school everyday, where I question their assumptions, ask them for data to support what they say, and push back on their ideas and theories.  They are getting a great education, no matter what school they go to.  A lot of time and money is spent on their development.  A few of the findings in the article didn’t surprise me but made me very nervous that we are no where near closing the gap.  A University of California professor found that high income children start school with 400 more hours of literacy activities than poor children.   They also point to how much money parents are investing in their children.  They found over the last 40 years, affluent parents have increased their spending on their children’s learning activates by $5,300 a year (adjusted for inflation).  Meanwhile, those on the lower scale of economic prosperity were only able to increase their spending on these actives by $480.

So you have to ask yourself, how exactly will a poor child succeed under these circumstances?  I know we don’t have all the answers but we have to keep at this.  This isn’t a poor issue or a ghetto issue.  This is a national issue.  There is a unreasonable amount of data that points to the high school diploma as the magic line.  We have to at least get students to that line, especially those who are growing up in the cycle of poverty and despair.  A lot of this work has to take place in the early years.  By the time they drop out, we all recognize we are too late.

Every month, 50,000 Latinos turn 18.  If we use the most basic acceptable statistics about drop out rates, 20,000 of them are turning 18 without a high school diploma, each month.  We know that students who drop out of school are more likely to be unemployed, earn lower wages, have higher rates of public assistance, likely to be single parents, have children at a young age, more likely to become criminals, and like many of the kids I grew up with, end up in jail...or dead.

How long do you think that will be sustainable?  Education as the silver bullet is part of who we are.  Our nation’s identity is made up in large part by the concept of opportunity.  If you give me the opportunity, I will succeed.  We need to restore that concept in education and give every student access to those silver bullets. 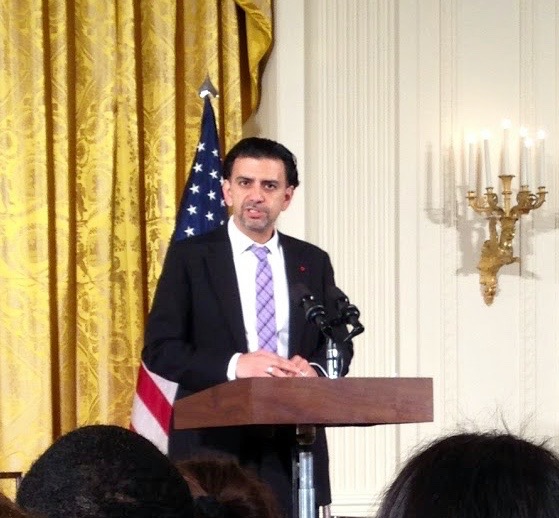